Meet the Maker – The Wild Shepherdess

The Wild Shepherdess timelessly champions the British Sheepskin and produces luxury, top quality handmade sheepskin products. A brand run by Harriet Foster-Thornton who will be joining us at our Christmas Fair in Harrogate.

We caught up with Harriet to find out more about her work. Read the interview below to discover more… 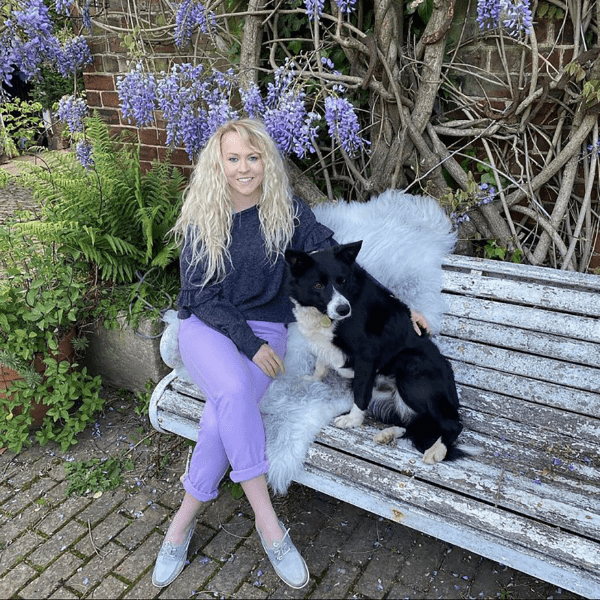 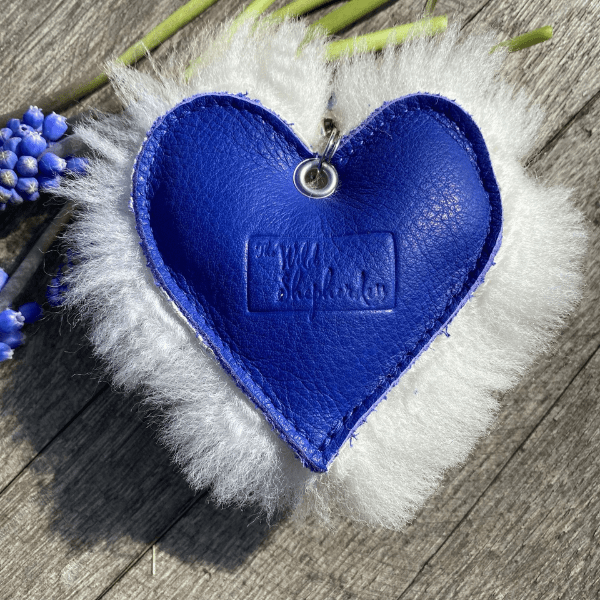 How did it all start?

The Wild Shepherdess started four years ago when Harriet Foster-Thornton, a first-generation sheep farmer was gifted four Suffolk sheep for her 21st birthday. Three months later Harriet went out and purchased 50 orphaned lambs which needed feeding every four hours. With farming in her blood, a lot of hard work and passion for agriculture the rest as they say is history.

Diversification for 26-year-old Harriet began by focussing on the by-products of British sheep with a strong belief in trying to use every part of an animal possible.

The Wild Shepherdess sources raw sheepskins from local farmers and abattoirs and alongside her own, Harriet cures and prepares the skins with her own hands before sending them away to be tanned by one of the two remaining sheepskin tanneries in the UK.

Harriet designs her own sheepskin products and works alongside skilled craftspeople in the UK to create luxury, British made goods with British sheepskins and wool being the focus of each product.

The story behind the name…

A nickname for Harriet when she first started shepherding, but we like to leave the why up to our customers imaginations…

What is your creation process?

My creation process begins when I’m shepherding my flock, this is when my creative ideas always come to mind, when I feel most at ease, I feel inspired.

I have always been a creative, hands-on person and with a degree in photography, I love different textures, tones and shapes. I lay different materials and colours out in front of me and see which combinations I like the most. I design a lot of my products on ensuring I will bring colour and happiness to someone’s home and life whilst also ensuring there is still some obvious component of ‘sheep’ in it to bring an element of ‘farm to home’.

A lot of my items are created from ‘off-cuts’ or with the intention to produce as little waste as possible. With this in mind I work out what I can make from a certain size scrap of sheepskin and this is how my sheepskin keyrings were designed, they are created from the off cuts once a sheepskin rug has been traditionally shaped.

My sheepskin and tweed cushions are all induvial and uniquely shaped to ensure I get the most out of one sheepskin, they are also stuffed with sheepskin offcuts and the tweed are all end of roll pieces that others thought couldn’t be utilised.

Where are you based?

I am inspired by my surroundings, the wonderful outdoors and my flock of sheep.

I am passionate and inspired to utilise the by-products that myself and other sheep farmers produce in the UK by turning them into wonderful items to be treasured and enjoyed, ensuring that we have as little ‘waste’ as possible. This is what inspires me daily, along with being inspired to utilise ancient skills involved with producing sheepskin and wool products.

The many benefits and beauty of the by-products I produce and work with also inspire me to continuously create new and unique designs with sheepskin and wool as a main focus. 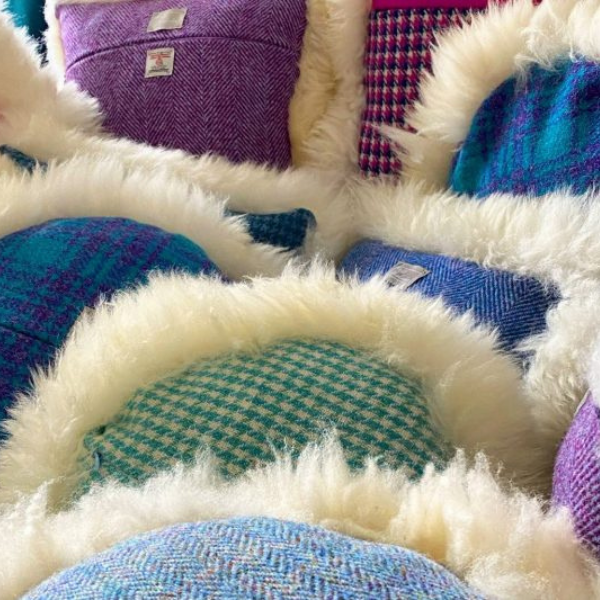 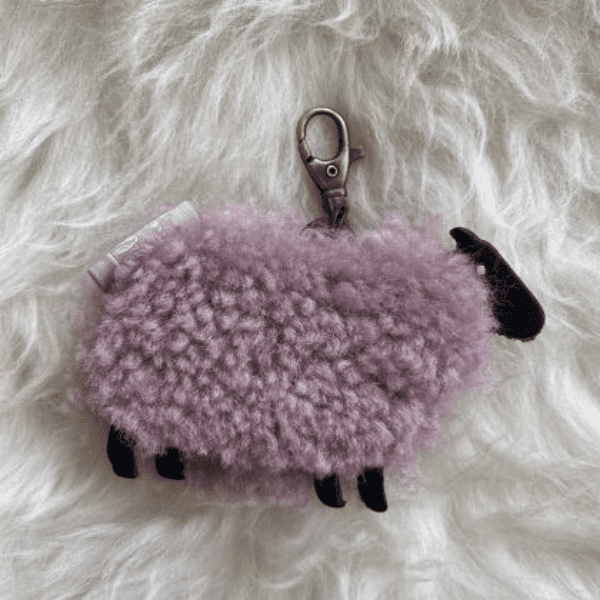 What makes your brand or products unique?

The Wild Shepherdess brand and products are unique as all products are focused around the by products of British sheep and today, genuine British sheepskins are quite rare to come across. Every sheepskin is unique and therefore every item is different in its own way.

Harriet herself makes the brand unique. She shares her sheep farming life on social media for people to learn and be inspired by her journey and processes. She can ensure that the main materials have come direct from the farm to people’s homes, knowing that those items have come full circle within the UK.

What are your plans for the next 12 months?

Plans for the next 12 months involve continuing to champion the British Sheepskin and wool by products with exciting new and unique products for all year round.

What is your next project?

The Wild Shepherdess has lots of new projects on the go with sampling new products right now. This involves a new wool knitwear collection, and new sheepskin handbag range amongst many other projects on the go.

What is your biggest achievement?

My biggest achievement is diversifying my sheep farming business and playing my bit in utilising the material we are producing here in the UK. And being able to share the beauty of it with so many other people whilst inspiring others 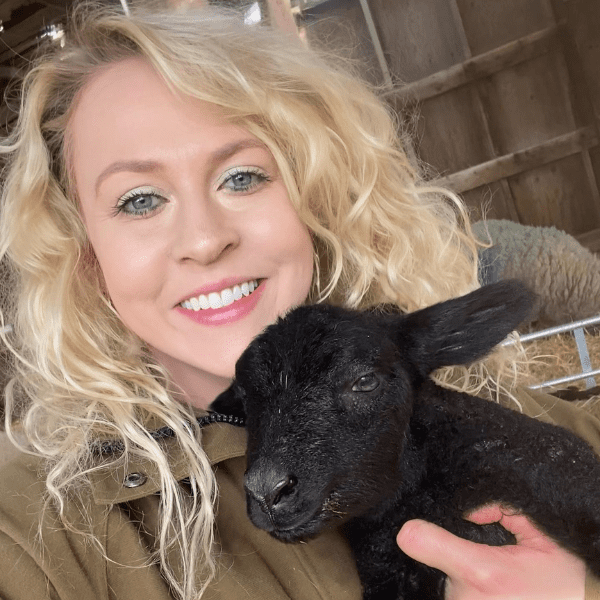 What is your best-selling product/line?

Our best-selling product has got to be our natural British Sheepskin rugs, each one is unique and beautiful in its own right.

These are closely followed by our Sheep & Heart Sheepskin keyrings, a firm favourite for gifting!

What are you looking forward to the most about exhibiting at the Christmas Fair?

I am so excited to be exhibiting at the Christmas Fair and honoured to have been accepted, to
bring to the public lots of wonderful new products all handmade in the UK.

It has always been a goal of mine to exhibit at such a well known and respected event.

What do you love about Country Living Fairs?

I have read Country Living magazine for years and was always first in line from a young age to pick up my Mum or Nannas copy once they had read every word… even if it were to just study and admire every photo.

I am a keen fan of the website and love flicking through the Instagram page for the variety of great content, I find it quite inspiring and motivating.

Your three top tips for crafters and makers…

Create something you love and truly believe in.

Know your value, don’t undersell yourself or your products.

Experiment, research and take time to keep learning and don’t be afraid to ask for advice..

Any advice for fledgling businesses…

Believe in yourself and don’t give up. Nothing worth having comes easy.